Winter is the time
to snuggle up under a New Quilt! 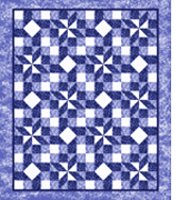 The two blocks are:
Susannah and Shooting Star

The pattern is featured in Blue tones and White. But...

For a more “Springy” look—Try it in these colors:
Red (for February) or Green (for March)

Or have fun with any color combinations you want!

Each block is over 20 inches square so you’re still working with large pieces, and the quilt will go together quickly.

Full cutting instructions and easy to follow directions are included with each pattern. (The price includes the Mini-Block Instruction Booklet.)

I hope you enjoy making SusannahsShootingStar.

The pattern comes in a PDF file which has the Mini-Block Instruction Booklet first then the pattern. PayPal should direct you to a Thank You page where you can download the pattern.

I will contact you when I've seen you purchased this pattern and check to see if you were able to download it.

This quilt is named Susannah's Shooting Star. (But the spiders of the web don't allow apostrophes or spaces as part of page names, titles, keywords, etc. So everything is run
together for that reason, my apologies.)

The Susannah block was featured in my research book (Barbara Brackman's Encyclopedia of Pieced Quilt Patterns) three times with
two different references, all of which are the same pattern with
small
differences in the way its pieces were cut out.

This block was first found in a "Ladies Art Company" catalog
(see sidebar). Beth Gutcheon also included two versions in her
The Perfect Patchwork Primer (published 1973) and The Quilt Design
Workbook (published 1976).
I don't know how this particular block acquired its name.

My versions for Susannah's Shooting Star simplified the two blocks into
Tri-Sqs and squares, eliminating anything that would have made it hard for
the beginner. The simplification also removed a difficult "Y" seam feature.

The Shooting Star block was featured in the above research book
seven times with many different references. There were several
patterns that don't resemble this block, but I chose this one because
it would be easy for a beginner and it was a pretty block.

It is older than Susannah, because the block I chose was a pattern
from "Ladies Art Company" first catalog -- dating it to 1895 or earlier.

If my memory serves me, Halley's Comet was a big thing in the late 1800s,
so maybe someone thought Shooting Star was a good name for a comet-inspired quilt block.

A little side bar...
Way back when I first put this project together,
IT WAS WINTER!
(And I was recovering from a very bad car wreck that included
a broken rib—not fun.)

When I first named it—
it was called
The Winter Special.
Now I'm calling this pattern
Susannah's
Shooting Star

So, don't you think
it’s time to make that
new quilt!

Some of my quilts went to Ireland

A baby quilt which started a trend... Don't make a quilt for one child if there are siblings!
(The cats were three of the original "Quilting Cats" who could never
pass up a chance to inspect a quilt:
Raven, Smokey and Patty!)

Thomas, the older brother, would be found wrapped up in the above quilt every chance he could get, so he
needed his own special quilt:
The Bear has left the Building 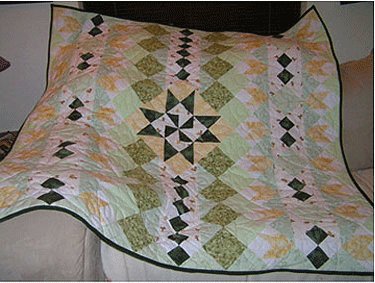 The last baby quilt for my friend's sister in Ireland. But the second one for my friend in the same pattern:
Go Bother Baile Atha Cliath (or the non-Gaelic translation: Road to Dublin)

They published catalogs into the 1970s.

In 1922 they introduced a second catalog entitled Quilt Patterns: Patchwork and Applique and Susannah appeared in it with a number of 485. Shooting Star had the number 14.

(Any of their patterns could be dated by the number assigned
it when published.)